Technology is often obscure, but knowing is the first step to avoid being overwhelmed by events. As it was years ago with the internet now is the turn of cryptocurrencies and blockchain, the technology on which bitcoin and similar are supported, increasingly on the lips of all but in many ways still unknown. To fill this gap, Sfida Italia 4.0, the Flero digital factory created by Sei Consulting (this spring another 300 square meter space will be inaugurated), wanted to “touch with hands a virtual currency” – underlines the administrator of the managerial and strategic consulting firm Ivan Losio – fully reflecting the spirit that drives this technological hub ». Inside the structure, thanks to the collaboration with Petr Kropotkin, a real “mining-farm” was set up to mine cryptocurrencies: it is a machine made up of 6 video cards connected in a rig, which provides a computing power of about 150 Mh / s (measure of the scroll rate of the blockchain indices). “It carries out a transaction certification activity, which consists in verifying the authenticity of the same through the resolution of a complex algorithm – explains the collaborator of Sei Consulting. The machine that before the other manages to recover the solutions validates the block of transactions, in the jargon the “mine”, and adds it to the previous blocks contained in the blockchain ».

This operation, which guarantees the regular and safe circulation of information in the widespread database, is repaid in criptocurrency, Ethereum in the case of the miner installed at Sfida 4.0. “We do not make money because the cost of installation, each card costs about 250 euros, and the energy to keep the machines online is too high in Italy – says Kropotkin. However, it is useful to show how cryptocurrencies rest on a well-defined system ».

It is the technology that allows their existence, the blockchain, presupposes much wider future developments. «Every transaction in the database is traced and transparent – confirms Losio – and this is a fundamental basis for thinking about the future of fintech. Linked to the blockchain there are also smart contracts, stipulations that meet previously set parameters and that are validated by themselves ». And then the interconnection of the machines, “in the future they will be able to do the orders themselves directly on the net”, and relationship with the banks, “for the distribution of credit lines with certain bases”. At Sfida Italia 4.0 we will return to talk about cryptocurrencies during a workshop organized on February 17 starting at 10. 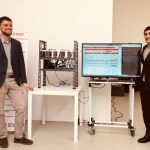 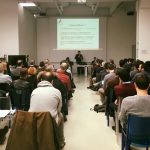 Crypto Trends – 17.02.2018events
Gen-Blocks uses cookies to ensure that we give you the best experience on our website. If you continue to use this site we will assume that you are happy with it. Gen-Blocks utilizza i cookie per assicurarti di darti la migliore esperienza sul nostro sito web. Se continui ad utilizzare questo sito, assumeremo che questo non presenta problemi per te.OK